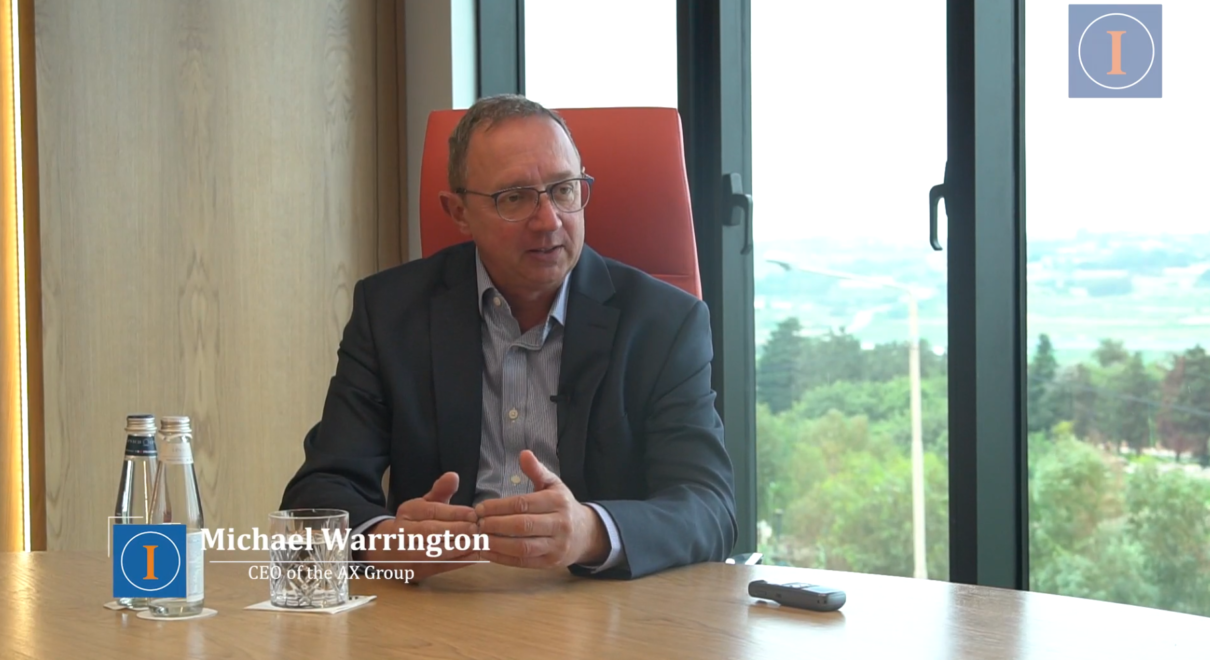 As seen on Malta Independent

The AX Group plans to list one of its companies on the Malta Stock Exchange to help raise funds for two major projects, Group CEO Michael Warrington said during an interview.

The Group recently underwent a reorganisation, consolidating its property assets into a subgroup of  companies so as to create the structure that is today AX Real Estate p.l.c.

“The structure we had before became cumbersome, as whenever we purchased a property, we set up a new company for it. But as we purchased different properties in the same areas, we took the opportunity to consolidate. For example, the three properties we have in Qawra were owned by three separate legal entities.

There was no longer any reason to keep this structure, so we consolidated all three under one company instead. This helped simplify the Group’s structure.”

Warrington explained that the restructuring was the first step towards the listing of one of its companies – AX Real Estate p.l.c. on the Malta Stock Exchange.

“This will be the umbrella company for a number of property-owning companies which include a class of  assets within the Group. These are properties that are developed and that have a steady income stream.  They include the AX Group hotels, the retirement village, warehouses, residential and other commercial property. The finance raised through the listing is part of the €110 million that AX Group needs for two major upcoming projects, the first being the Verdala Hotel and Virtu Heights project in Rabat and the second being the AX Seashells Resort at Suncrest hotel extension in Qawra.

“We are very excited about both of these projects. We’ve owned the Verdala Hotel for many years. We now have the full development permit and demolition works on the old Verdala hotel which commenced some months ago.”

The AX Group CEO described the property as “having a very unique location.” The plan is to build a small hotel and a number of residential apartments.

“Given the prestigious site, these will be top-end apartments targeted at well-established clients.”

As for the hotel, he said that inland hotels have always had a different character when compared to coastal hotels, which generally are resort-type properties. Seeing the success that boutique hotels have witnessed in recent years gave the AX Group courage to go for this project, he said.

“Travellers today are looking for different experiences, not just sun and sea. We want to incorporate these opportunities into the philosophy behind what we are creating at the Verdala hotel.  The Verdala project on its own will result in very significant growth within the Group over the coming years. It’s an investment that will bring in a good return, which will in the coming years finance other projects we plan to undertake in the future.”

Turning to the second project, he said that the AX Seashells Resort at Suncrest in Qawra is a flagship hotel for the Group. “For many years it was the largest hotel on the island and was a reflection of Mr Angelo Xuereb’s foresight and vision in terms of tourism trends in the 1980s. The plan is to again turn this into the largest hotel on the island through an extension, resulting in a hotel with a total of 618 rooms once the project concludes.”

He said that the extension is just the first phase of what will likely be three phases in the Qawra area, incorporating the other properties owned by the AX Group there – three lidos and the AX Sunny Coast Resort & Spa.

“We’ve created a masterplan for which there is currently a planning application for the lido sites. The idea is to create one new lido instead of three individual ones.”

“With 618 rooms in the Suncrest, together with the 200-apartment hotel we’ll have once the Sunny Coast is redeveloped, potentially we could have up to 3,000 guests in the complex at any one time. In this scenario, the lido needs to be a common facility similar to what one would experience on a cruise ship. We will have a lagoon type of pool, dedicated areas for families and areas exclusively for adults. We will also have conference facilities, a variety of food and beverage establishments as well as a spa.”

The Group’s focus, he said, is on creating something unique that will stand the test of time. Asked about the Stock Exchange listing, he said that the AX family has long eyed a listing on the stock exchange.

“Two years ago we were considering an IPO at the AX Group level. The circumstances and developments as a result of Covid-19 changed those plans. Our hotels were impacted by the pandemic, although our other businesses continued doing very well over the past couple of years. We were cognisant of the realities and it was not deemed an opportune moment to list.”

“When undertaking major investments like we are doing, you need to part-finance this with equity capital. Raising all the finance through debt instruments is possible and we would have had no use to do it, but it pays the investors to introduce new ownership into the Group and we are not afraid of that.”

Asked about his vision for the future of AX Real Estate p.l.c., Warrington said that the structure created allows for flexibility and growth. “One of the lessons we learnt was to stick to what we know. Stay with your core business and grow that. We will continue to look for opportunities and identify good commercial properties and investment opportunities for steady growth.   We want this company to give superior returns to the investors.”

Extension of the Suncrest Hotel

Asked what the expansion, through the two major projects means for the AX Group, he said that it led to a significant increase in the number of employees. This, he said, was the short-term effect.

“In the medium term, we must remain focused on our goals and objectives. This would mean completing the two projects on time and on budget.”

He expressed confidence in the tourism sector and is optimistic it will return to the pre-pandemic level in 2022.

“In the long-term, the reopening of the Verdala hotel would mean it would become our 8th property. With some other opportunities we are exploring at the moment, of which we have a strong interest, I believe the target we set a few years ago to, by 2025, have the AX Group increase its worth to half a billion euros, is within our grasp.”

After completing both projects, the Group will turn to the second and third phase of the Qawra plans, he said. “This would see a completely new foreshore in Qawra and the Sunny Coast would be pulled down and completely redeveloped. That would probably see a further €50 million invested.”

“We also have a large piece of land in Marsa, where we are working on plans to develop towers and an office complex, looking at something which may be a bit different from what other players are doing.” The Group is also eyeing other projects, including ones in the care sector which are not necessarily in Malta.

Prospective investors should refer to the prospectus dated 6 December 2021 (“the Prospectus”), which may be downloaded from the website of AX Real Estate p.l.c. (“the Company”) www.axrealestate.mt. Copies of the Prospectus are also available from Authorised Financial Intermediaries listed in the Prospectus. The offer period is between 10 January 2022 and 31 January 2022 or earlier as may be determined by the Company. This advert has been issued by the Company, a public limited liability company with registration number C 92104 and having its registered address at AX Group, AX Business Centre, Triq id-Difiza Civili, Mosta MST 1741, Malta. The Malta Financial Services Authority (“MFSA”) authorized the Prospectus and the shares and bond (“the Securities”) as eligible to listing on the MSE pursuant to the Capital Markets Rules. The approval of the Prospectus by the MFSA should not be understood as an endorsement of the Securities. The value of an investment, as well as the income therefrom, can go down as well as up and past performance is not necessarily indicative of future performance. Investors may lose some or all of the money invested. Prospective investors wishing to subscribe for the Securities should do so on the basis of the Prospectus to fully understand the features of the investment and the potential risks and rewards associated with both the shares and the bond. Prospective Investors are urged to consult their independent financial advisor as to the suitability or appropriateness of investing in the Securities. This advert has been approved by Rizzo, Farrugia & Co. (Stockbrokers) Ltd. (company registration number C 13102, Airways House, Fourth Floor, High Street, Sliema SLM 155), M.Z. Investment Services Limited (company registration number C 23936, 61, St. Rita Street, Rabat RBT 1523), Curmi & Partners Ltd (company number C 3909, Finance House, Princess Elizabeth Street, Ta’ Xbiex XBX 1102), (“the Sponsors”), on behalf of the Company. The Sponsors are licensed to undertake investment services in Malta by the MFSA under the Investment Services Act, Cap 370.

https://axrealestate.mt/wp-content/uploads/2022/01/Screenshot-2022-01-06-153654.png 986 1828 [email protected] https://axrealestate.mt/wp-content/uploads/2021/07/AXRealEstateLogo.svg [email protected]2022-01-06 14:38:122022-01-06 18:08:58AX Group to list AX Real Estate p.l.c. on the stock exchange
Scroll to top
We use cookies on our website to give you the most relevant experience by remembering your preferences and repeat visits. By clicking “Accept All”, you consent to the use of ALL the cookies. However, you may visit "Cookie Settings" to provide a controlled consent.
Cookie SettingsAccept All
Manage consent