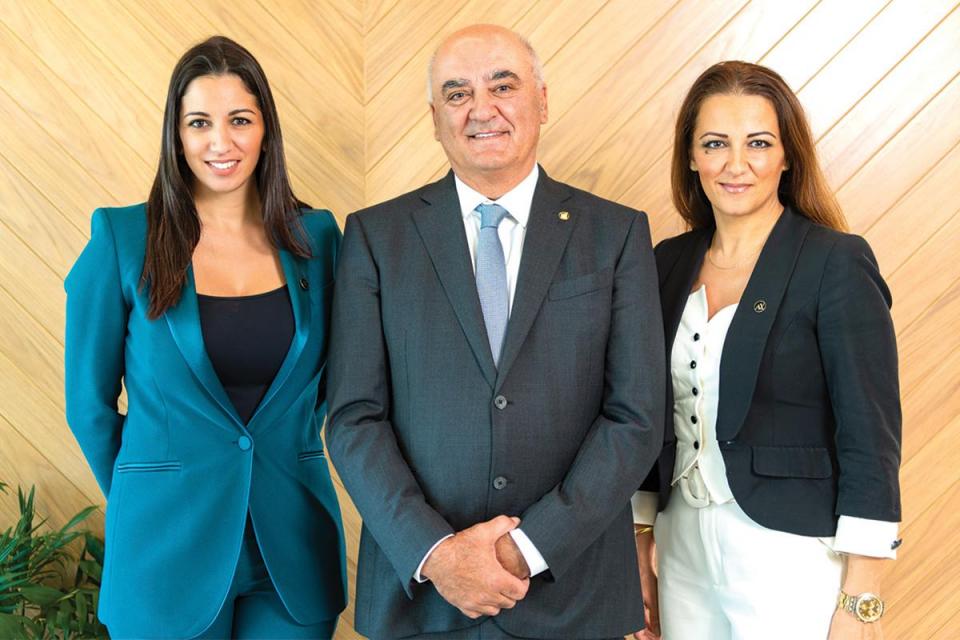 As seen on Times of Malta

The multi-million-euro transformation of the AX Group’s Suncrest Hotel is well underway, with a clear vision to re-establish both the hotel and its locality as a highly sought-after destination.

Qawra has certainly been on a wild journey since its early development in the 1980s. Once a seaside town that didn’t quite make the list of must-visit places on the island, it quickly evolved into a mecca of sunshine and smiles as the 1980s boom turned it into a holiday hotspot. Decades later, its popularity waned as overdevelopment muddied the Qawra experience for locals and foreigners. Now, another new chapter has begun. 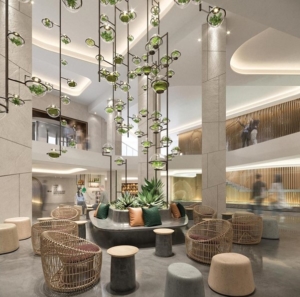 Few people have observed Qawra’s evolution quite as closely as hotelier and veteran entrepreneur Angelo Xuereb. As the force behind much of the town’s original expansion, he provided the vision for what would become a landmark on its seafront promenade and burgeoning skyline: the Suncrest Hotel.

“I always knew Qawra was special and that it deserved to be centre stage,” says Xuereb, Chairman of the AX Group. “So, when I wanted to build a hotel in the 1980s, I chose it as the most up-and-coming location of the moment. Even then I could foresee how much people would love its coastline and incredible sea views.”

Qawra was derelict back then, the chairman recalls, and the Suncrest was its catalyst for change. Xuereb knew he was taking a risk but chose to take the bold decision of developing a high-end property that wouldn’t just stand alone, but which would help to transform the entire area. “It was a four-star that behaved more like a five-star,” he smiles. “We created the ‘wow factor’ for our guests and exceeded expectations. As my first foray into the hotel world, it set the standard for everything we would go on to achieve as a Group.”

Extension of the Suncrest Hotel.

Claire Zammit Xuereb, AX Group’s Hospitality Director, is equally attached to Suncrest and its place within the company’s impressive portfolio of successes. She remembers the Suncrest as an iconic destination in its heyday and is currently driving its exciting redevelopment.

“I can vividly remember my father taking me to the Suncrest site and explaining he was going to build a hotel there,” smiles Zammit Xuereb, who also heads up the Group’s other hospitality projects, including The Palace in Sliema and Rosselli in Valletta among others.

“I remember Suncrest being built. My earliest memories of it feel strikingly similar to today, as we are now living through a reconstruction phase. Whether by sheer coincidence or destiny, I was about 10 years old at the time; the same age my oldest children are today. As a result, Suncrest’s rebirth is being witnessed and relived by the next generation of our family, which of course makes it even more special to us.”

Denise Micallef Xuereb, Director of Construction and Development who is leading various teams behind the Suncrest redevelopment says: “Our family has been naturally predisposed to taking on roles that not only are ideal for the organisational set up but that also reflect each of our strengths and skills. And the Suncrest project is yet another opportunity to work closely together to achieve common goals and aspirations.”

In the 1980s, the Suncrest helped spearhead the development of Malta’s mass-market tourist product. Thanks to its vast number of rooms and array of amenities, the hotel began to attract large groups of travellers for conferences and incentives, as well as droves of tour operator travellers who loved the family-friendly facilities. “Suncrest completely changed the whole dynamics of Qawra and Buġibba,” continues Zammit Xuereb. “It was a vacation haven, and both visitors and locals loved everything about it.” 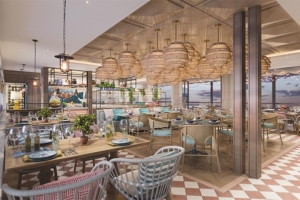 However, as times changed and new five-star developments opened in St Julian’s and further afield, Qawra and the Suncrest faded a little into the background. “The whole area lost its soul, as well as its scope, and was left scraping the bottom of the barrel as tourists went elsewhere. As investors, this was painful to see, and we tried many things over the years to keep improving the Suncrest and its nearby sister hotel the Sunny Coast. There were highs and lows in that time, and they were all leading to this next important milestone: the Suncrest’s complete redevelopment as a hospitality destination of the future.”

The hotel’s general manager Joseph Vella has also been instrumental in conceptualising this new vision, having been equally influential in the 13 years since he took the helm of the property. “I joined at a difficult time for the Suncrest, when occupancy was low and profits were spiralling down. However, we successfully turned things around. In the years since then, we took it from a loss-making endeavour to one that has immense potential – so much so that the AX Group directors are ready to invest €52 million to, once again, make it the best on the market. 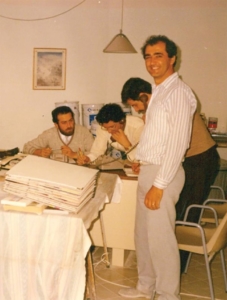 Angelo Xuereb creating the Suncrest concept in the 1980s.

“This new phase is likely to be the most exciting yet, with a ground-breaking development that will deliver quality and value to a vast range of travellers, and help to put Qawra firmly back on the map.”

The new Suncrest development will raise the bar in numerous ways. The hotel will have 618 rooms (up from 450), most with glorious sea views. Facilities will be segmented, to provide options to both families and those after something unique, with pools and restaurants in both categories, as well as dedicated play areas and drinks venues to match.

“One of our goals was to create a resort that is attractive throughout the year, and that’s what the Suncrest plans to achieve. Qawra is already very popular in the summer, but we wanted to craft a vision that would be exciting to visitors in the winter and shoulder seasons too. The sheer variety of restaurants and facilities will do exactly that, with plenty to attract conference and business travellers. Plus, locals will be catered for in the vast range of food and beverage options – from the 11th floor Skybar with stunning views to the grab-and-go coffee shop on the ground floor. Every element is being carefully thought through and implemented,” continues Vella. 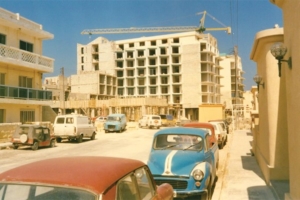 The Suncrest and Sunny Coast will form the bedrock of this project and create a fabulous, welcoming and ultra-stylish place to stay. “But this is about so much more than accommodation,” continues Zammit Xuereb. “From the convenient parking to the many options for wining, dining, dancing, swimming, shopping, and spending time together as a family, the Suncrest has been modelled on a Dubai-style resort that can delight and entertain across the generations. Highlights include the fabulous lagoons, adults-only rooftop pool, and signature restaurants featuring high-end Mediterranean cuisine. Every ounce of the development will be packed with personality. I truly believe the Suncrest will become Malta’s futuristic village by the sea and a hotel for all seasons.”

Futuristic as it may be, this exciting vision is very much coming into sight, with the construction phase of the project racing along and ahead of schedule. In fact, plans are in place for the first major phase to be completed in 2023. 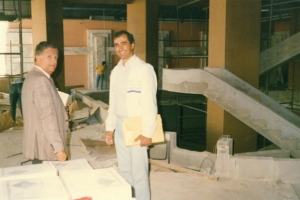 Angelo Xuereb creating the Suncrest concept in the 1980s.

“Back in the 1980s it was the chairman’s vision to make Suncrest the best four-star hotel on the island,” says Vella. “Today, as a team, we are pulling out all the stops to honour that legacy and take it one step further, to make it the best in its category and set it apart year-round. Like every other one of AX’s projects, it will make a statement and stand testament to everything that Mr Xuereb, his family and the Group have created.”

As for Xuereb himself, he is pleased that the Suncrest and Qawra will once again find themselves at the top of their game, just as he envisaged all those years ago. “Everything about this project will do things differently, with quality and genuine character infused in every step. We’re excited to share it with the public, and to create another landmark for our team to be proud of.

“After all, we couldn’t do it without them and are very grateful to the team for their loyalty, including the many people who have been part of the Suncrest story over the decades. We hope this new phase will give the Suncrest back to them and many others long into the future, as we breathe new life into Qawra once again,” the chairman concludes.